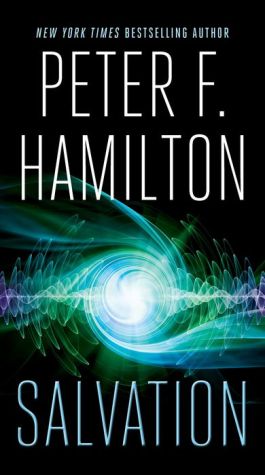 Salvation by Peter F. Hamilton Humanity’s complex relationship with technology spirals out of control in this first book of an all-new series from “the owner of the most powerful imagination in science fiction” (Ken Follett).   In the year 2204, humanity is expanding into the wider galaxy in leaps and bounds. Cutting-edge technology of linked jump gates has rendered most forms of transportation—including starships—virtually obsolete. Every place on Earth, every distant planet humankind has settled, is now merely a step away from any other. All seems wonderful—until a crashed alien spaceship of unknown origin is found on a newly located world eighty-nine light-years from Earth, carrying a cargo as strange as it is horrifying. To assess the potential of the threat, a high-powered team is dispatched to investigate.  But one of them may not be all they seem. . . . Bursting with tension and big ideas, Peter F. Hamilton’s Salvation is the first book of an all-new series that highlights the inventiveness of an author at the top of his game. Advance praise for Salvation “Peter F. Hamilton smashes through the crazy battlefield of space opera like a giant all-conquering war-robot. His newest is loud, proud, and beyond epic. Accept no substitutes, this is the real deal. You need Salvation, my friend. Everyone needs salvation.”—Ian McDonald “No one offers action-packed, meticulous, suspenseful, and consistent high-tech futures better than Peter Hamilton, and Salvation cranks all of that up five notches.”—David Brin “A gripping novel from one of the modern masters, Salvation is a must-read not just for sci-fi fans but for anyone who loves a great story well told.”—Jason M. Hough “Hamilton knows how to build a world, and he’s one of the best in the field at imagining complex societies. Just as important, though, he knows how to populate his future environments with real-seeming people whose lives extend beyond the page. Salvation is a twisty and hugely satisfying SF thriller that opens a portal on a new and exciting series.”—Alastair Reynolds “Peter F. Hamilton’s great strength is building rich, complex future societies rooted in our own and slamming with terrible threats, and in Salvation this skill is deployed to great effect. Salvation is space-opera intrigue with a cold shock of an ending that makes the sequel a matter of urgency.”—Ken MacLeod